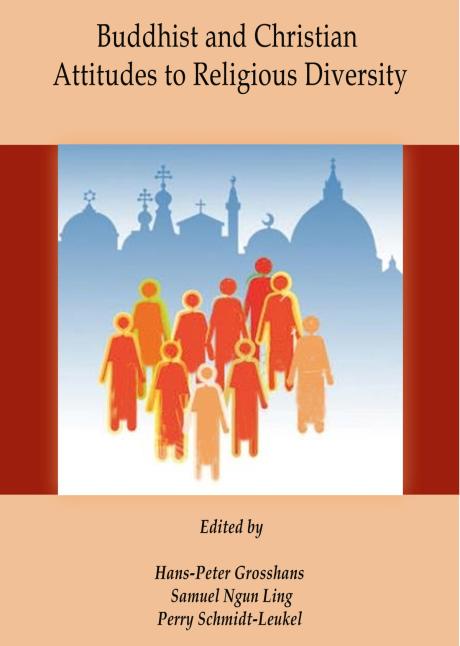 The attitudes of Christians and Theravāda Buddhists toward religious diversity are at the center of a new publication jointly edited by Prof. Dr. Perry Schmidt-Leukel, Professor of Religious Studies and Intercultural Theology, and Prof. Dr. Hans-Peter Großhans, Professor of Systematic Theology, from the Cluster of Excellence “Religion and Politics”, together with Dr. Samuel Ngun Ling, Principal of the “Myanmar Institute of Theology” in Yangon, Myanmar. “Buddhist and Christian Attitudes to Religious Diversity” has been published in February 2017 with Ling’s Family Publications in Yangon, Myanmar. “The contributions to this book inquire about the possibility to overcome such perceptions of other religions, and of religious diversity as such, which imply contempt and disdain toward other faiths,” says Professor Schmidt-Leukel. “In South Asia, this issue is currently not only getting momentum, it is becoming explosive.”

The volume includes three major parts. Part one provides an overview on different conceptions of religious diversity in social discourse and focusses on various models of pluralism as they are found and currently debated in Christianity and Theravāda, the main branch of South Asian Buddhism. Part two locates discourses on religious diversity in specific historical and socio-political contexts. The contributions analyze the relationships between Christianity and Theravāda in main Theravāda countries such as Thailand, Sri, Lanka and Myanmar, but also the presently tense relations between Islam and Theravāda. Particular attention is given to the political dimension, especially to the impact of the colonial heritage.

The Case of Myanmar

Part three of the volume is entirely on the situation in Myanmar: How are politics and relationships between the different religions interconnected? What is the potential of interfaith dialog in fostering interreligious cohabitation? After decades of military rule the cautious process of democratization does not only allow religious diversity to become more visible but also demands that full and just account is taken of it in relation to the nation’s social and political life. “In this respect neglect and failure could”, according to Prof. Schmidt-Leukel “threaten and, at worst, even ruin the process of developing an open and democratic society.” The contributions to this volume are based on an international expert symposium which was held in Yangon, Myanmar, in August 2015.

Among the contributors are internationally renowned specialists such as Elizabeth Harris, Alan Race, Kenneth Fleming, Imtiyaz Yusuf or Reinhold Bernhard, as well as a number of experts on religion and politics in South Asia, joined by Buddhist scholars and Christian theologians from Myanmar who are actively involved in inter-faith dialogue. At the Cluster of Excellence, Professor Perry Schmidt-Leukel is head of the project C2-16 “Interreligious Theology.” He is a member of the interconnecting platform „Transcultural Entanglements“ and of the Coordinated Project Group “Exchange among and between ‘world religions’: appropriation – transformation – demarcation”. Professor Hans-Peter Großhans headed the research project C16 “Religious Plurality and Interreligious Transformation Process in the Pancasila-Based State: Islam and Christianity in Indonesia” (until 2012). (exc/ill)